In the midst of all the discussions I have been having for the last few months relating to Berkshire Creative and the development of the creative economy concept in the region and the state, it’s easy to overlook the fact that all of these ventures, whether they be Tanglewood, Shakespeare & Company, Interprint, or any other business in the Berkshires is always the result of an act of vision.

In business, we talk about entrepreneurship as something that can be fostered, learned and nurtured. We don’t often talk about vision: that idea of something that does not yet exist, and yet is worth pursuing. Tina Packer’s vision of a Shakespeare theatre in the trees at The Mount became over 30 years later this wonderful, expanding institution. Vision is a very distinct thing, an event of clarity that creates a series of goals ahead. In my life, I’ve always tried to set goals, and just about every goal I have set for myself I have achieved, but before I can set new goals for myself I need to have a vision of what can be and what will be, and sometimes when I try to look ahead the way seems cloudy. That fog is risk, the chances that we need to take, the obstacles we need to overcome to achieve our goals.

I’m working on a bunch of different visions right now, trying to sort out what the next markers will be, what the next goals. But I was inspired last night when I went to Mixed Company, down in Great Barrington to see Joan Ackerman’s “Mixed Company” put on “Indian Blood” directed by Kristine Wold. This tiny theatre has been running for 26 years under Joan’s singular direction and vision. It is a gem, a wonderful, local creative space where all my friends and neighbours get together and put on wonderful plays. It’s distinctly local, but none the less professional for being so.

Before the play we did some fun shots with the cast out on the railroad tracks behind the theatre. Thanks to Stephanie Hedges for putting the impetus for the shoot together. If you hear about Mixed Company and have a free evening, go see them. Creativity is living there. 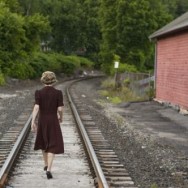 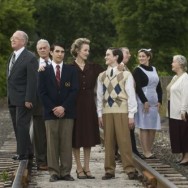 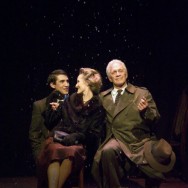 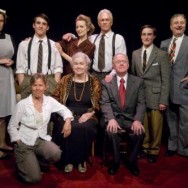